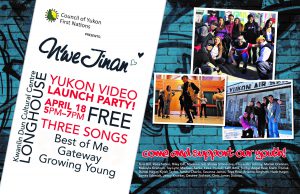 A group of First Nations youth from across the Yukon will launch music videos this week. The youth aged 10 – 18 star in the videos, which accompany three songs they wrote and recorded with N’we Jinan, a professional Indigenous music production non-profit out of Montreal.

The 23 youth from Watson Lake, Pelly Crossing and Whitehorse learned about song recording, sound mixing, beat-making and music video production with the N’we Jinan team earlier this month through a Council of Yukon First Nations mental-wellness initiative for youth.

The Video Launch Party will take place Wednesday, April 18, from 5pm – 7pm, at the Kwanlin Dun Cultural Centre. The event is free and open to everyone. It precedes N’we Jinan’s national CD launch which features the three songs, and which the youth will attend on April 20 in Vancouver.

“These talented youth have created amazing works of art that showcase their skills. I encourage everyone to attend the video launch so we can celebrate with them and applaud their achievements.”